Pathology at high altitude occurs in part because of gene-environment mismatch. We introduced that idea in the first, second, and third blog entries on the topic of high altitude diseases. So far we focused on other clinical contexts in which hypoxia inducible factor (HIF-1) activation is adaptive during common disorders at low altitude.

One area where HIF-1 seems to be important is during infection and trauma. There are some remarkable similarities between the clinical presentation of acute mountain sickness (AMS) and patients with critical illness. This similarity is not accidental. It’s because of  shared mechanisms underlying systemic inflammation in sepsis and altitude illnesses. Altitude illness may occur because hypoxia activates inflammatory pathways, mediated by the toll-like receptor TLR4 and HIF-1. Activation of TLR4 and HIF-1 are important also in sepsis. While those pathways appear maladaptive in altitude illness, they are reported to promote survival during infections, and HIF-1 signaling in particular appears to provide protection to the host during critical illness. 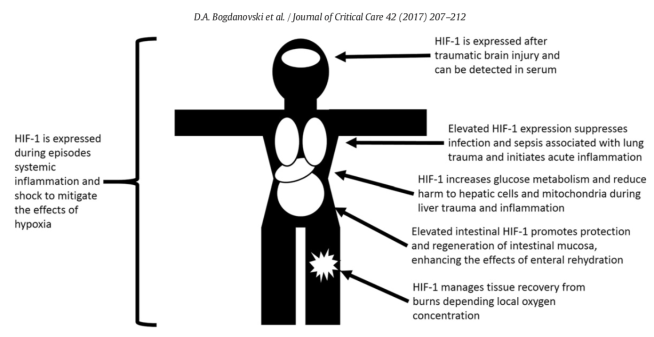 Peyssonnaux and colleagues showed that HIF-1α activation regulates the bactericidal capacity of phagocytes. Microbial cues, such as exposure to Group A Streptococcus also induced HIF-1α, even in the absence of hypoxia. HIF-1α was also upregulated in wild type macrophages at normal levels of oxygen when challenged with both Gram-positive bacteria –  Staph and Group A Strep – and Gram-negative bacteria – Pseudomonas and Salmonella. Gene knockout mice with myeloid cells lacking HIF-1α were unable to mount a successful immune defense against Group A Strep infection, likely because HIF-1α was necessary for the production of bactericidal proteases and antimicrobial peptides. Mice with myeloid cells lacking HIF-1α “failed to restrict systemic spread of infection from an initial tissue focus.” In other words they were at risk for bacteremia and sepsis. These results have been replicated by other groups for instance here and here, showing that HIF-1α function is a key component of anti-pathogen host defense, one that is important in bacterial infection and in sepsis.

HIF signaling also appears to strengthen the intestinal epithelial barrier, perhaps preventing gut microbes from leaving the intestine. Improved survival during sepsis and critical illness because of HIF-1 activity would provide strong selective pressure for the persistence of  oxygen-dependent and inflammatory pathways.  This perspective suggests that the shared inflammatory pathways in infections and altitude illness are important to host defense. Activation of the same pathways at altitude may have different results. At extreme altitude, HIF-1 and TLR4 activation can drive inflammation that is counterproductive, even lethal.

We have focused thus far on altitude pathology in mountaineers and genetic lowlanders who travel to high places. What about those who have lived at altitude for many generations? Does gene-environment mismatch apply to them too? Not so much, as we shall see in the next section.

Next up – Altitude tradeoffs in high altitude people