More people are living and traveling to high altitude than ever before. Pictured here is my colleague Darryl Macias atop Mount Rainier where we held a high altitude conference a few years back. 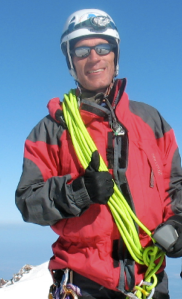 The Lake Louise scoring system, pictured above, designates acute mountain sickness when headache occurs with 1 or more additional symptoms. Nausea or vomiting, or fatigue, or lassitude, or dizziness plus headache = mountain sickness.

Recall that the underlying issue with high altitude illness is hybobaric hypoxia – relatively low partial pressure of oxygen in the air brought in to the lungs at high altitude.

Why does high altitude hypoxia cause a headache?

The answer for most of us is that hypoxia causes regional arterial vasodilation in the brain. Wilson and colleagues used ultrasound to show an increased in cerebral blood flow at high altitude. This increase was mediated by a change towards larger caliber of the the cerebral arteries when exposed to hypoxia. The effect is reversed rapidly when subjects are given supplemental oxygen.  Increased cerebral blood flow in hypoxic conditions is caused by hypoxia-induced increased adenosine and nitric oxide production, and the effect may be understandable as an adaptation to deliver oxygen to supply the relatively fixed metabolic demands of the brain.  We see this effect in other common sea-level conditions, e.g. brain contusion and stroke. 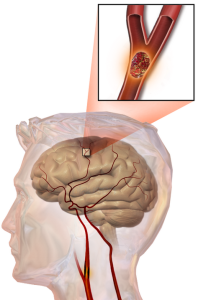 When the brain is injured or suffers stroke, blood flow increases in adaptive fashion to supply the watershed areas of brain in the penumbra.

The increased delivery of blood flow to damaged areas of the brain is caused by regional hypoxia. Researchers have shows that Hypoxia Inducible Factor -1 otherwise known as HIF-1 is responsible for the increase in cerebral blood flow that happens during hypoxic or ischemic stress in the brain (Sorond et al. 2009). Further research points to the critical role of HIF-1 in recovery and healing from brain injury – for a review see (Umschweif et al 2013). The take home from these studies: HIF-1 activation during local and regional ischemia and hypoxia drives protective and beneficial responses that are essential for recovery form brain injury.  However, HIF-1 activation by the same signals can go awry in acute mountain sickness. 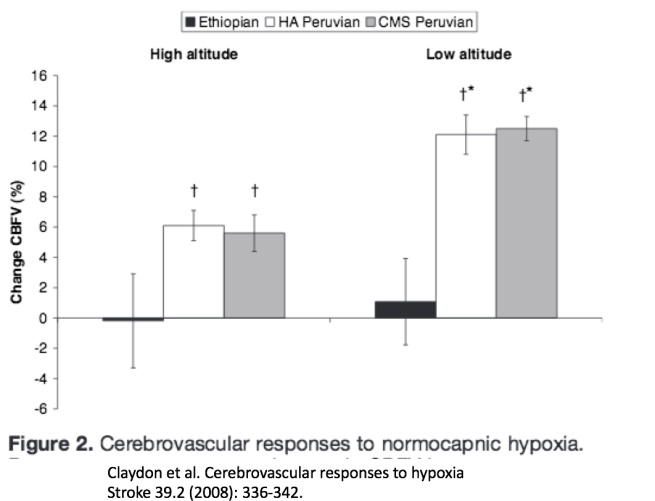 This work suggests that a trade-off may influence hypoxia-caused increased cerebral blood flow. It might be good sometimes, but it’s costs may be substantial for those living for generations at high altitude. Ethiopian highlanders look different from us lowlanders, and different from high altitude Peruvians in how their brains respond to low oxygen availability. Ethiopians have blunted hypoxic pulmonary vasoconstriction and blunted hypoxic cerebral vasodilation. These features may protect them from headache, pulmonary edema, and acute mountain sickness.

I should mention that high altitude cerebral edema is not just a problem of increased blood flow. Inflammation and leaky blood vessels play a role too. Why does that happen? I propose that inflammatory cytokines and blood vessel leakiness can be explained as a maladaptive response to signals associated with infection. How exactly? Check the next entry in this series.