Lessons from the ADRENAL trial

The ADRENAL trial is the recently published, and influential, randomized controlled trial of hydrocortisone in patients with sepsis. There are two lessons to be learned from the ADRENAL trial.

Lesson #1. The first is a small lesson. Should we be using steroids in sepsis? Answer: no.

This was a big study – including over 3600 patients with septic shock from 69 medical surgical ICUs in 5 countries (Australia, New Zealand, Denmark, Saudi Arabia, UK). The New England Journal article was published the same day that the study results were presented at the 2018 Critical Care Reviews conference. The bottom line:

Hydrocortisone treatment did not improve survival in patients with septic shock. The intervention was also associated with a significant increase in adverse events.

This is the definitive answer. Equipoise no longer exists on the question of steroids benefiting survival in sepsis. A metaanalysis presented at the 2018 Critical Care Reviews conference confirmed the study’s main finding. No survival benefit. Subsequent trials are unlikely to be carried out.

But this is the just the small lesson of ADRENAL.

Lesson #2. The big lesson. It is time to rethink sepsis. Hydrocortisone is, after all, a treatment that targets the immune system, suppressing  inflammation (in addition to other effects). The ADRENAL results call into question the idea that shock is a state of dysregulated immunity.

In the ADRENAL trial, hydrocortisone shortened the time patients were deemed to be in shock. 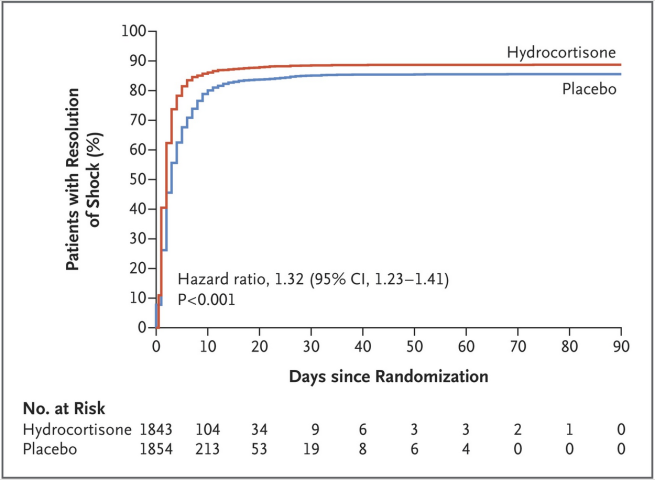 This “improvement” was illusory. The treatment made patients appear to be getting better. But they weren’t. They still died at the same rate.

Not so fast. The authors write: “but taking into account episodes of recurrence of ventilation, there were no significant differences in the number of days alive and free from mechanical ventilation”

To recap: hydrocortisone in shock is a classic example of an intervention that makes the numbers look better, but ultimately does not help the patient.

What accounts for this failure? And why do we keep trying to find magic bullet therapies aimed at the immune system in sepsis?

The reason: sepsis researchers and clinicians have been blinded by a mistaken notion – the idea that sepsis is a dangerous overreaction of the immune system. Lewis Thomas wrote about microbes in sepsis: “It is our response to their presence that makes the disease. Our arsenals for fighting off bacteria are so powerful . . . that we are more in danger from them than the invaders.”

Does the immune system go disastrously wrong in sepsis? Getting this answer right is critically important because septic shock is a leading cause of mortality in humans. Hydrocortisone is just the most recent in a long series of sepsis trials involving anti-inflammatory agents aimed at improving survival. Only one immune modifying drug, recombinant activated protein C, ever passed through phase 3 clinical trials with FDA approval. Despite this supposed success, later definitive trials involving recombinant activated protein C showed it to be useless and it was unceremoniously yanked from the market in 2011. Another tantalizing target of inflammation in sepsis – the TLR4 pathway –  resulted in spectacular failures in clinical trials, including the recent ACCESS trial. More than 10 anti-LPS/TLR4 agents were tested in sepsis. None led to successful therapies.

The ADRENAL trial is just the latest in a long series of trials of immune agents that fail to boost survival in patients with sepsis.

The history of immune agents in sepsis, taken together, suggests that natural selection favors responses to life-threats that sometimes appear excessive, but are adaptive and beneficial in the aggregate. This does not mean that every immune response in every individual is optimal. Our genomes have only an evolutionary legacy of ancestors who survived infections (at least until the age of reproduction) to guide them. For our patients, we simply don’t know how to adjust the immune response to sepsis. But it is time that we stopped acting as if we did, and spent more time trying to understand the adaptive tradeoffs that have shaped our immune systems.

The time has come to rethink sepsis in the context of evolution.

This is part 1 of 2. Coming up next. The Trojan horse of sepsis bundles.

Read also, a similar article I wrote about sepsis in the Evolution and Medicine Review.

Evolution in critical care will be the topic of a special symposium during the 4th annual meeting of ISEMPH – The International Society for Evolution, Medicine and Public Health in beautiful Park City, Utah. Abstract submissions are now open.