Why does coronavirus spare the young and clobber the old? 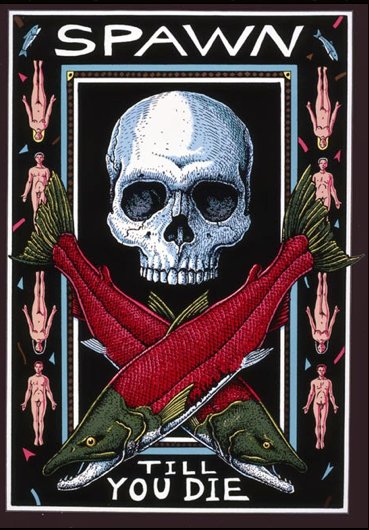 Spawn til you die by Ray Troll

One of the first outbreaks of COVID-19 in the United States occurred in King County Washington in a long-term care facility. It resulted in infection among 81 residents, 34 staff members, and 14 visitors. In total, 23 persons died. As of April 14th, 3800 residents of nursing homes had died of the illness. May of these victims have pre-existing conditions that predispose to severe disease, but the greatest risk factor for death for most of these residents is old age. Older patients have increased risk of death from a variety of infections, from influenza to sepsis. As most insurance adjusters know, advanced age increases the likelihood of death from all causes.

One explanation for the increased likelihood of death in older age groups is the senescence of the immune system, which fails to respond appropriately to invading pathogens. Another related idea is termed inflammaging. The notion of inflammaging has to do with premature aging related to chronic low grade inflammation. Read more here. Of course, both of these ideas are proximate explanations for age-related death – that is, they relate to the mechanistic, descriptive, explanations of the aging process. They do not explain the ultimate, evolutionary, reasons why aging happens the way it does in humans and other organisms. Evolutionary explanations of aging can also help explain why older victims of COVID-19 are more likely to die.

Evolution can explain these patterns of age-related risk of death and age-related disease. They are a result of tradeoffs and occur because of evolved life history traits.

Several evolutionary hypotheses of senescence exist. These hypotheses include antagonistic pleiotropy, declining power of selection, and the disposable soma hypothesis.

Antagonistic pleiotropy is the concept that a gene for survival or a gene that promotes
reproduction early can be selected for even if it kills you at a later
age. So selection favors juvenile survival at the expense of old age survival. This hypothesis recognizes that most traits have both costs and benefits, and are tradeoffs. The tradeoff in antagonistic pleiotropy is improved health and fertility in the young, but disease and premature death in older individuals.

The disposable soma hypothesis is another idea to explain aging. This hypothesis recognizes that the nonreproductive part of the body (the soma) exists only to support the reproductive part of the body. At any moment in time an adult can devote energy to the maintenance of the body or to reproduction. Put simply, after successful reproduction, the soma is “disposable”, and genes are passed on. This tradeoff is vividly illustrated in adult salmon, also in octopus, which appear to do all their aging at once, immediately after a single reproductive effort. In many animals, bearing offspring shortens lifespan. There is some evidence of this in humans too. 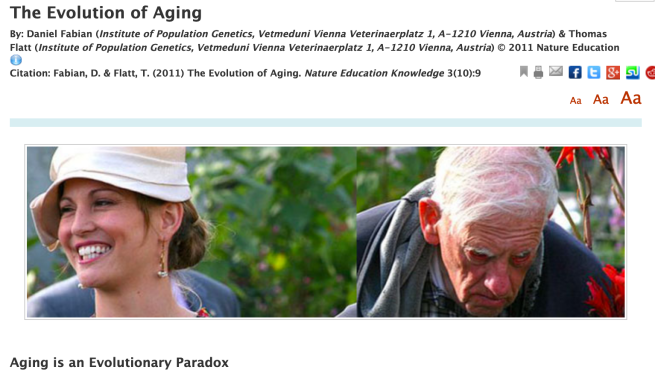 Read also this piece about the death habits of female octopus.

Listen to this audio link by the Canadian born rapper Baba Brinkman: all the way to senescence (with lyrics):