Vague symptoms and lessons for the evolution of sepsis

“Vague Presenting Symptoms Are Associated with Increased Mortality in Septic Shock” is the title of a recent entry of Journal Watch, a section of the New England Journal of Medicine written by emergency physician Daniel Lindberg. Lindberg summarizes findings of Filbin et al. Presenting Symptoms Independently Predict Mortality in Septic Shock: Importance of a Previously Unmeasured Confounder published in the journal Critical Care on June 29, 2018.

The background here is that sepsis remains a major killer of patients in the hospital. Despite billions of dollars in drug development, sepsis still lacks a satisfactory treatment – something we have covered before in this blog. Sepsis treatment bundles, promoted by the Surviving Sepsis Campaign, were once robust treatment recipes that confidently prescribed multiple simultaneous interventions: giving activated protein C, blood transfusions, dobutamine for cardiac output, normalizing central venous pressure, and maximizing oxygen delivery.  Unfortunately, most of those interventions don’t actually work, and were since deleted unceremoniously from the bundle. Still, the conventional wisdom is that patients will do better if we identify sepsis quickly and start fluids and antibiotics as soon as possible. The new diminished Surviving Sepsis treatment bundle still prioritizes quick administration of antibiotics and fluids, controversially within one hour.

Filbin and colleagues hypothesized that vague presenting symptoms might cause delays in recognizing sepsis, and potential delays in patients getting IV fluids and antibiotics. Vague presenting symptoms included weakness, fatigue, abdominal pain, and no fever. These patients were compared to those with fever or other explicit signs of infection (cough, urinary pain, or skin redness). In their study of 654 patients meeting the definition of septic shock, patients with vague symptoms were slower to get antibiotics and had a higher mortality rate.

My hot take on this article was: “nothing to see here – isn’t is generally true that atypical symptoms make it harder to diagnose any disease, leading to potentially lethal mistakes?”

But delays in antibiotics were not apparently the problem here. From the Filbin paper: “Consistent with our hypothesis, we found differences in mortality, 34% versus 16%, for septic patients who presented to the ED with vague versus explicit symptoms of infection…Our data did not support the corollary to our hypothesis that antibiotic delay was a primary driver of mortality.

In Journal Watch, Lindberg wrote: “I would have lost money betting that delayed antibiotics was the key factor contributing to increased mortality in these patients with vague presenting symptoms. The authors suggest instead that vague symptoms may represent a completely different phenotype of sepsis.”

So the main finding – vague symptoms linked with increased death – is unexplained in the paper. A deeper look suggests that fever might provide the answer:

Fever was a major determinant of “vague presentation” in the Filbin study.

A focus on fever makes this paper appear less groundbreaking. Vague presentation often simply meant afebrile, or worse, hypothermic in the Filbin study. Previous work has shown that lack of fever or low body temperature heralds a poor prognosis in sepsis. A study of 2225 patients with sepsis in Sweden showed an inverse relationship between fever and mortality.

Fever in the Emergency Department Predicts Survival of Patients With Severe Sepsis and Septic Shock Admitted to the ICU. 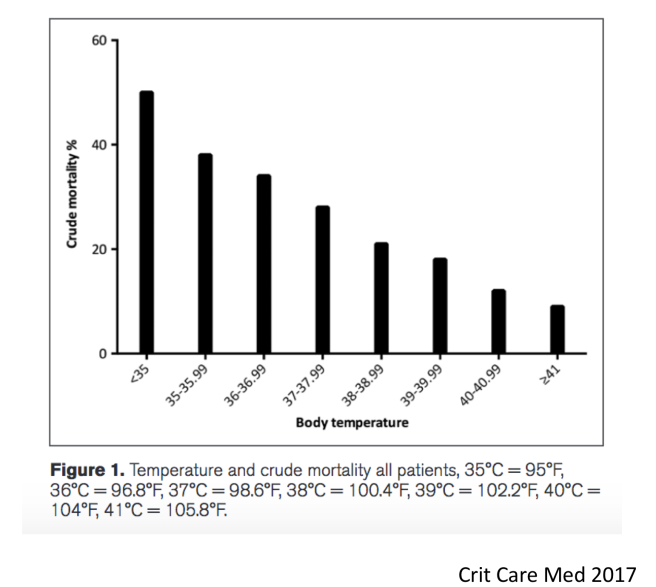 A similar result was found in 2128 Danish patients with infection. Here is the link: Hospitalized acute patients with fever and severe infection have lower mortality than patients with hypo- or normothermia: a follow-up study.

Paul Young and colleagues showed that lower temperatures were associated with higher mortality among 636051 ICU patients with infection in New Zealand, Australia and the UK.  ncbi.nlm.nih.gov/pubmed/22290072

These observational trials all suffer from the limitation that association is not causation. However, active body cooling that eliminates fever also has been shown to increase mortality in sepsis. From the recent CASS trial: “After recruitment of 436 of the planned 560 participants, the trial was terminated for futility (220 [50%] randomly allocated to hypothermia and 216 [50%] to routine thermal management). In the hypothermia group, 96 (44·2%) of 217 died within 30 days versus 77 (35·8%) of 215 in the routine thermal management group (difference 8·4% [95% CI -0·8 to 17·6]; relative risk 1·2 [1·0-1·6]; p=0·07]).” Link here: Induced hypothermia in patients with septic shock and respiratory failure (CASS): a randomised, controlled, open-label trial.

I think the CASS trial did not get the attention it deserved. To underline it’s result: cooling sepsis patients is not just futile, it can be deadly. (The trial was stopped early because of ethical concerns for the enrolled patients. But early termination is also a problem, because it decreased the impact of the study and increases potential harm for future patients).

As for acetaminophen (aka paracetamol, brand name “Tylenol”), Paul Young showed that its use in septic patients did not improve mortality (nor did it apparently kill them). Read Paul Young The Heat Trial NEJM

Along the same lines, we fail to improve mortality when we block pathways responsible for fever and sepsis syndrome.  One prominent example is: Effect of eritoran, an antagonist of MD2-TLR4, on mortality in patients with severe sepsis: the ACCESS randomized trial. I wrote about the failure of eritoran here: in the Evolution and Medicine Review – Disabling the Smoke Detector.

These findings, taken together, argue for a benefit of fever in sepsis. The absence of fever also makes sepsis patients present more vaguely. But death in vaguely presenting patients doesn’t result from anything we doctors do (like starting antibiotics too slowly). Instead those patients may be unable to generate a defensive fever.

Why then, is fever so misunderstood?  The notion that the body’s response is primarily to blame for sepsis mortality underlies many sepsis treatments and dates to Sir William Osler:

“Except on few occasions, the patient appears to die from the body’s response to infection rather than from it”. (The Evolution of Modern Medicine (1904)

Since Osler’s day, we have been focused on attacking the body’s response (the purported problem) instead of focusing on the root microbial source of sepsis. Osler may be forgiven for identifying the host as the source of mortality. Now, as in Osler’s day, many researchers remain convinced that sepsis is a syndrome of dysregulated response to infection. The most recent definition of sepsis published in JAMA 2016 defines sepsis as “a life threatening organ dysfunction caused by a dysregulated host response to infection.” However, the idea that sepsis is dysregulated is simply not supported by evidence – (evidence that we will outline in the next entries of this blog).

One lesson of Filbin’s paper is that we should rethink sepsis itself.  We should also reexamine our rationale for intervening when we do. Some phenotypes should be left alone, and others supported. Often we should avoid reflexive attempts to make septic patients appear normal.

If you are interested in these topics, and want to participate in devising better ways to treat sepsis, come to the workshop we are organizing in Park City August 1-4, 2018. The special symposium on evolution and sepsis, includes me – Joe Alcock MD, along with intensivists Scott Aberegg MD and James Morgan MD.

Evolution in critical care will be the topic of a special symposium during the 4th annual meeting of ISEMPH – The International Society for Evolution, Medicine and Public Health in beautiful Park City, Utah. Registration is still open.