As a public health problem, sepsis is a stubborn and serious problem. It is a leading cause of mortality for hospitalized patients. Deaths from sepsis are increasing, not decreasing, so it is unlike other leading causes of death such as cardiovascular disease.

Despite many decades of intense research and clinical trial efforts, only one drug was ever approved specifically for sepsis – recombinant activated protein C, trade name Xigris. That drug was removed from the market because it was subsequently found to be ineffective. No other investigational drug in sepsis has ever led to a durable new treatment.

Part of the problem is that the Sepsis-3 consensus (2016) defines sepsis as a dysregulated host response to infection. For decades this view of sepsis – an out of control host response – has guided therapeutic approaches to the condition. Under this framework, sepsis therapies generally target molecular pathways that underlie the host response. In other words, if the host is the problem, it follows that interventions targeting the host should make patients better. In fact, this approach has not worked, calling into question the notion that the host is the problem in sepsis.

Back to our question: why did the only drug ever approved by the FDA specifically for sepsis, recombinant activated protein C (Xigris, Eli Lily), fail to help patients?

One of the reasons that rAPC failed to improve sepsis outcomes is that it interfered with ancient, evolutionarily conserved, host strategies for combating infection.

Let’s focus on two responses – coagulation and increased neutrophil extracellular trapping (NETosis) – that are activated during sepsis. These were the direct and indirect targets of recombinant activated protein C (Xigris, Eli Lily). 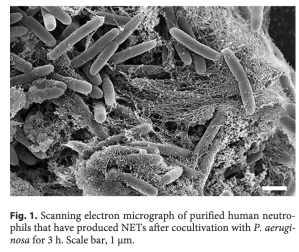 Clark and colleagues showed the importance of extracellular DNA produced by neutrophils that function as an efficient way to trap and immobilize pathogens. Pathogen detecting receptors on platelets activate neutrophil NETS that trap bacteria in septic blood.  In sepsis, neutrophil NETS sequester pathogens in the circulation and the extracellular matrix.

Both coagulation and neutrophil NETS are evolutionarily conserved and necessary to clear invasive pathogens during infection.  Networked with other tactics, coagulation and NETosis are part of a long co-evolutionary struggle. Pathogen don’t sit idly by when the host engages in pathogen trapping and NETosis. They often deploy countermeasures aimed at inhibiting or subvert host responses.

Perhaps the reason most sepsis interventions has failed is that too often, our drugs work in tandem with pathogen efforts to subvert the immune system.

Pathogens interfere with blood clotting and with NET formation. Beiter and colleagues showed that the pathogen Streptococcus pneumoniae produces a DNAse that dissolves NETS. Histones that kill microbes trapped in NETS are evaded by various pathogen strategies. Murphy and colleagues reported that the opportunistic pathogen Finegoldia uses proteases (SufA) and an extracellular adhesion protein (FAF) to destroy histones embedded in neutrophil NETS.

When we design drugs that mimic those pathogen strategies we handicap the host in this contest. We should not be surprised that these efforts have not improved patient outcome.

Is there a better way? Probably. We should focus more on pathogen virulence, and less  on the host response that with passing time seems not so dysregulated.  If we do target the host, we should focus on making hosts more resistant to pathogen manipulation.

We need to stop picking sides with pathogens. The neglected host response deserves more respect for researchers and clinical trialists.  Novel strategies that incorporate lessons from this evolutionary arms race may result in more effective treatments in sepsis.