In cancer, clonal cells evolve ways to escape restraints on growth and motility. These evolved traits favor the fitness of the clones (in the short term anyway) usually to the detriment of the organism that gave rise to the neoplasm. However, cancer lineages are usually dead ends, so that adaptations that allow neoplasia are not passed on from generation to generation. New cancers have to start from scratch, evolving de novo mechanisms to evade controls on growth and reproduction in each lineage. At the same time, anti-cancer adaptations have evolved in multicellular organisms that control and remove proto-neoplastic cells. Multi-generational selection thus permits ongoing evolution of adaptations against outlaw cells, keeping cancer at bay, at least most of the time.

What happens when cancer lineages don’t die with their host? Those cancers would not require de novo mutations to escape control. One might suppose that a cancer that can jump from host to host would evolve to be a formidable parasite with efficient means of evading host control. In a recent study published in Cell, a transmissible leukemia found in clams seems to support this view. Transmissible cancer in clams joins only two other contagious cancers, the facial tumors of Tasmanian devils and a venereal cancer of dogs.  In these unfortunate cases, the cancers is apparently passed from generation to generation. These cancers do not have the handicap of starting from scratch in carcinogenic evolution. They behave more like pathogens, in a never ending evolutionary arms race with the host organism.

In soft shell clams found in the Northeastern US and Canada, a leukemic cancer is genetically identical and widespread, suggesting it has evolved a parasite-like capacity for infection and transmission. Click on the image for the Cell paper by Metzger et al, Horizontal Transmission of Clonal Cancer Cells Causes Leukemia in Soft-Shell Clams: 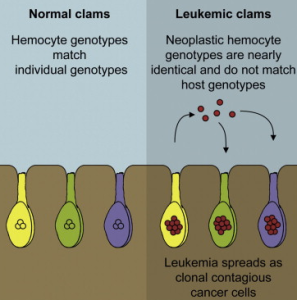