Too much IV fluid in trauma? 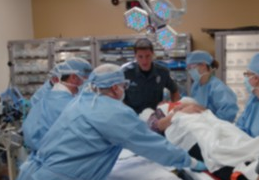 It would seem to make sense that injured and bleeding patients need fluids, don’t they? Blood or saline can replace lost blood and restore normal cardiovascular function and oxygen delivery, according to traditional teaching.  When your bleeding patient is pale and has a low blood pressure and a weak pulse it is hard not to intervene. On the other hand, much published research – e.g. Bickell’s 1994 randomized controlled trial showing increased death in penetrating trauma patients who had received pre-hospital IV fluids  – challenges the view that normalizing blood pressure in trauma patients is a good idea. Unfortunately, little change in practice has occurred since Bickell’s classic study.

A recent study by Schrieber and colleagues in the Journal of Trauma and Acute Care Surgery again tested which approach to blood pressure in trauma is better for survival: 1)  standard treatment, which involves aggressive provision of IV fluids aimed at normalizing blood pressure; 2) a less aggressive approach that permits blood pressure to remain low (called controlled resuscitation or CR here).

Spoiler alert: Patients given less fluid, with lower blood pressure, had better survival in the blunt trauma group, though no differences were seen in penetrating trauma.

The abstract is here:

CONCLUSION: CR is achievable in out-of-hospital and hospital settings and may offer an early survival advantage in blunt trauma. A large-scale, Phase III trial to examine its effects on survival and other clinical outcomes is warranted.

How does adaptation and natural selection play into these findings? Read: Turning off the tap – less is more in fluid resuscitation by Joe Alcock – The Sharp End 2012