I grew up in a home without an automatic dishwasher, meaning that mealtimes were generally followed by arguments about whose turn it was to wash dishes by hand.

Despite much hand-wringing about hand dishwashing, a new study by Hesselmar and colleagues in the journal Pediatrics indicates that my parents were doing me a favor by reducing my allergy risk. This observational study involved about 1000 Swedish children. Kids whose parents used an automatic dishwasher had an increased risk of developing allergy and asthma. Handwashing was associated with a decreased risk ( odds ratio 0.57; 95% CI: 0.37- 0.85), on par with other protective factors such as eating fermented foods and being breast fed. Hesselmar’s group previously published a study linking the method of pacifier cleaning with allergy in children. Kids whose parents licked a pacifier clean (mouth cleaning), instead of boiling or tap water cleaning, had fewer allergies. In that previous study, dishwashing of pacifiers was linked with higher allergy risk. Hesselmar’s recent study suggests that machine dishwashing in general may be dangerous in terms of allergy and asthma risk in children: 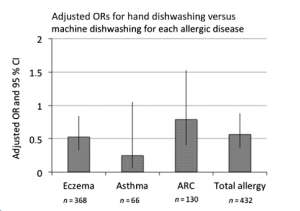 Of course, it remains to be seen if machine dishwashing has a causal relationship with allergy, or if it is simply linked with another causative factor. The authors speculated that hand dishwashing is associated with increased microbial exposure, which has been shown to be protective against allergic diseases. This idea is called the hygiene hypothesis, which we have covered extensively, e.g. here and here.

As for me, hand dishwashing did no good, at least from an immunologic perspective. I am a sneezing eye-watering allergic mess this time of year.