Several recently published articles explore the idea that insulin resistance – a key feature of diabetes – is an adaptive mechanism that evolved by natural selection.  Because of this recent interest, I am going to write a series of posts describing the various hypotheses that may provide an evolutionary explanation for insulin resistance.

Insulin resistance: An adaptive mechanism becomes maladaptive in the current environment is the title of a recent manuscript published in the journal Metabolism by Tsatsoulis and colleagues (2012). The authors write that insulin resistance has several adaptive functions that historically promoted human survival. Key to their argument is the observation that insulin resistance is tightly linked to pro-inflammatory immune responses and the increased energy demands that occur during infection, trauma, and stress.

Insulin is a hormone that regulates energy storage and glucose transport in particular. Insulin activates insulin receptors which then acts on the GLUT 4 cell membrane glucose transporter. Under ordinary circumstances, insulin allows the GLUT 4 transporter to move glucose into muscle and fat cells. Insulin promotes the storage of glucose as glycogen in the liver and skeletal muscle, and insulin increases the storage of energy in fatty tissue, by increasing triglyceride movement into adipocytes. Insulin resistance, by contrast, decreases cellular energy uptake in most somatic tissues, and antagonizes “anabolic” glycogen and triglyceride storage. 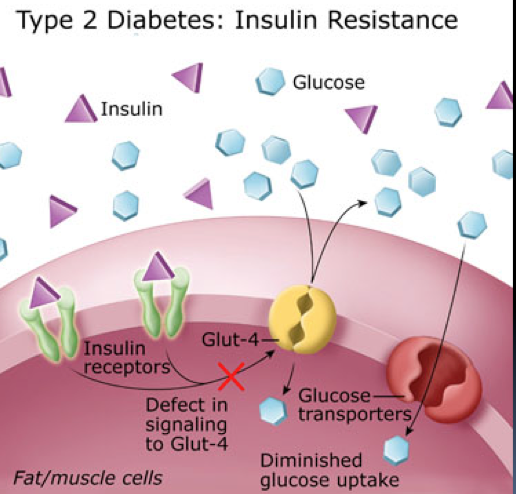 During insulin resistance (IR), the Insulin receptor signaling to the GLUT 4 is inhibited, preventing GLUT 4 from transporting glucose. Thus, in IR, glucose is prevented from entering muscle and fat cells.

As Tsatsoulis and colleagues relate, not only does insulin resistance prevent muscle uptake of glucose, but IR simultaneously induces the mobilization of stored energy resources. This mobilization of energy is thought to provide survival benefits by preserving brain function, fueling immune activities, and initiating inflammatory processes that help meet the challenges of infection, trauma, and other stress.

As part of an explanation for the damaging features of IR in a modern environment, Tsatsoulis et al. review the concepts of lipotoxicity and inflammation in obesity. Fat cells, aka adipocytes, in the overfed state become hypertrophic causing them to secrete adipokines and chemokines that attract macrophages and induce tissue inflammation. The authors suggest that these events “serve a normal physiologic function” during time-limited stress, while chronic stress and tissue inflammation result in disease, such as metabolic syndrome.

Central to Tsatsoulis et al.’s thesis is the idea that the body, and fat cells in particular, have a limited capacity to cope with energetic excess. They write: “when the capacity for safe lipid storage in adipose tissue is exceeded, lipid overflow to non-adipose tissue occurs.” According to these authors, this excessive lipid flow results in pro-inflammatory fatty acid metabolites that activate serine kinases such as JNK that then induce IR.

To recap, Tsatsoulis and colleagues write that inflammation and energetic shifts during IR were adaptive in a historic setting, primarily as a way to meet the energy needs of infection. But for overfed modern humans, the events of IR are pathological; IR during chronic inflammation occurs because of the inability of fat cells to adequately manage and store fatty acids in a safe way. They also suggest that during evolutionary past of humans, physical stresses were likely to trigger temporary IR that was adaptive. On the other hand, modern chronic, predominantly psychological, stresses trigger inappropriate IR.

The contrast between a historical benefit for humans compared to a modern pathological response will be familiar to readers of this blog as environmental mismatch, which we have discussed here  for instance.

In my view, this article is a valuable addition to the many previously published articles on the potential immune benefits of IR. For instance, Fernandez-Real (1999) published a similar hypothesis nearly fifteen years ago. Fernandez-Rael promoted the idea that IR is part of a suite of metabolic changes with adaptive value during stressful events, such as famine or trauma.

A major flaw in Tsatsoulis et al.’s analysis is the assumption that chronic fat overload is necessary to induce the pro-inflammatory, damaging, effects of IR. In fact, a single high fat meal is sufficient to induce pro-inflammatory signaling and insulin resistance (e.g. Ghanim et. al 2010).  Ghanim et al. and many others have  shown that a high fat meal is pro-inflammatory and induces IR because of the fatty effects on gut microbiota and gut-derived endotoxin. I would suggest that any treatment of the adaptive value of IR must take into consideration the modulation of metabolism by the microbiota. A variety of studies have shown that inflammation and IR may occur because of the stress exerted by microbiota and endotoxemia.  The function of microbiota-induced IR is an important clue and deserves further exploration.