In 2008 the New York Times published an article, News keeps getting worse for vitamins. Since then, additional trials of vitamins have also spectacularly failed. The Cochrane review, a well-known publisher of meta-analyses, reviewed anti-oxidant vitamins, Vitamin C, Vitamin A, Vitamin E, and selenium, and concluded that while these compounds had shown promising results in animal studies in the lab, these anti-oxidants were associated with increased mortality in humans.

Even our favorite vitamin, vitamin D, has come under fire for lack of evidence for benefit: The sun goes down on Vitamin D.

In the case of iron, the relationship between Iron and infection is very well documented.

Matthew Barber and colleagues elegantly showed that humans have a long co-evolutionary history of competition with pathogens over iron. Neisseria meningitidis, for instance, shows evidence of evolution on the iron binding protein TbpA, which is involved in iron piracy that pries the valuable molecule from the host iron sequestering molecule transferrin. Barber was awarded the Omenn prize for this groundbreaking work at the ISEMPH conference on evolution and medicine in 2015.

Certainly, some malnourished individuals do benefit from vitamin replacement. In children with documented Vitamin A deficiency, evidence suggests they may benefit from getting Vitamin A. But this result is the exception, not the rule.

So, why have most vitamin studies failed? Answer: like iron, many commonly used vitamins feed pathogens.

Pathogens like Neisseria require iron as a growth and virulence factor. Other microbes, including E. coli, have similar iron stimulated growth. As you might expect, iron can cause an expansion of E. coli and related Proteobacteria in the gut microbiota. One illustration of this was a nutritional supplementation study that failed to show benefit to borderline malnourished children. Iron supplemented bread given to anemic children in the Ivory Coast resulted in increased numbers of pathogens in the fecal microbiota.

Kirk Klasing, the biologist we featured on a recent post on diet and immune system in chickens, made the same point, and deserves credit for his work that highlights these ideas: nutrients feed you, but they also feed pathogens. Biotin, a B Vitamin, promotes the growth of Staphylococcus aureus, and E. coli, in chick serum, as shown below. Click the image to view the source – Klasing’s presentation. 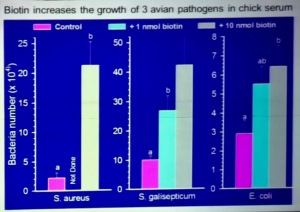 For micronutrients that do not feed pathogens, vitamins interfere with the evolved regulatory function of the molecules. Many immunomodulatory nutrients are regulatory compounds. When we flood the system with supra-normal doses of vitamins, we prohibit the normal function of these molecules. In effect, we increase the noise to signal ratio. In that way, vitamins interfere with normal functioning and regulation of immunity, metabolism, and digestion.

Evolution has shaped the immune system to be sensitive to the presence and quantity of nutrients. We can thank natural selection for the regulatory function of nutrients. Ultimately, evolution is the reason why vitamins are often bad for us.

Learn more about the evolution of nutritional immunity at the 4th annual meeting of ISEMPH – The International Society for Evolution, Medicine and Public Health, in beautiful Park City, Utah. Registration and abstract submissions open soon!