All the way to senescence 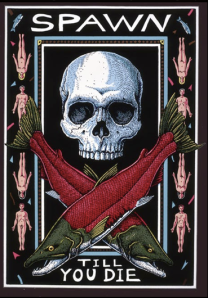 Spawn til you die by Ray Troll

Class, here is the link to Baba Brinkman’s ode to senescence (with lyrics):

Understanding age-related risk of death and age-related disease are the result of tradeoffs and occur because of evolved life history traits.

We are going to cover evolutionary hypotheses of senescence for next weeks class. These hypotheses include antagonistic pleiotropy, declining power of selection, and mutation accumulation.  This link does a nice job of explaining the concepts.

Antagonistic pleiotropy is the concept that a gene for survival or a gene that promotes
reproduction early can be selected for even if it kills you at a later
age. So selection favors juvenile survival at the expense of old age survival. This hypothesis recognizes that most traits have both costs and benefits, and are tradeoffs. The tradeoff in antagonistic pleiotropy is improved health in youth, but disease in old age.

Medawar extended his idea to include mutation accumulation. This idea posits that the body accumulates deleterious mutations at late ages that, because of the declining power of selection, are not selected against, and thus accumulate. In wild populations, not enough organisms reach advanced age, so these mutations are invisible. If allowed to achieve advanced chronological age, these mutations exert damaging effects, reducing fitness and contributing to senescence.

The disposable soma hypothesis is another idea to explain aging. This hypothesis recognizes that the nonreproductive part of the body (the soma) exists only to support the reproductive part of the body. At any moment in time an adult can devote energy to the maintenance of the body or to reproduction. Put simply, after successful reproduction, the soma is “disposable”, and genes are passed on. This tradeoff is vividly illustrated in adult salmon, which appear to do all their aging at once, immediately after a single reproductive effort. In many animals, bearing offspring shortens lifespan. There is some evidence of this in humans too.

Menopause is a strange phenomenon, because it represents premature aging of the female reproductive organs, asynchronous with the rate of decline in function for the rest of the body. It is paradoxical because it would seem that natural selection would favor maximal reproduction throughout the lifespan for humans. Given the fitness benefits of continued reproduction, why does the female reproductive organ age faster than the rest of the body? Humans are nearly unique in having a menopause; apparently killer whales are another example (see below).

Some suggest that menopause evolved because grandmothers are more successful at passing on their genes by investing in grandchildren than in more babies of their own. Others argue that menopause is a consequence of modern medicine prolonging the lifespan of women past 60 when most pre-historic women would be dead. So in the past reproductive aging would have been in sync with aging of the rest of the body. In this view menopause reflects the early mortality in pre-history and is a gene-environment mismatch.

Readings for next week:

(Read also the Alcock and Schwartz 2011 and Stearns 2013 papers in the previous post.)

Optional Extra: as mentioned by James Gurney. His article, The Microbial Olympics

Here are the slides from the 8/18/15 class: Introduction to Evolutionary Medicine 2015

Writing Assignment, due Tuesday August 26th in class (Remember hardcopy only, and the assignment here is the correct one):

I want to know if humans are still evolving. What do you think? Specifically, do you think that modern medicine will affect human evolution? Will that evolution shape human longevity? (3/4 to 1 page total)

Extra credit: Do you think modern medicine will affect the evolution of human menopause?