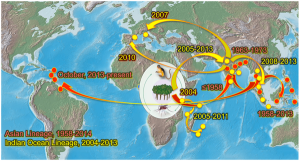 Chikungunya sounds exotic, but in fact it is the name of a mosquito-borne viral syndrome that is increasingly found to the New World (closer to home for me and many readers of this blog). Originally from West Africa, Chikungunya has been common in that continent and Asia for many years. Only recently has it been isolated form patients in the Western hemisphere. For background, read this excellent piece by Weaver about the recent spread of Chikungunya. Outbreaks in several Caribbean countries have been ongoing, especially Haiti and the Dominican Republic. Patients who have been in the Caribbean have presented to emergency departments, including the one where I work.

Last month, the first documented case of transmission occurred in Florida. Just this week, a mosquito tested positive for Chikungunya in Houston, Texas. This evidence of endemic spread suggests that Chikungunya may be here to stay.

One development that has promoted the spread of this virus in Asia is that the virus has switched vectors, from Aedes egypti to Aedes aldopictus  tiger mosquitoes. Both of these mosquitoes exist in the Southern US.

Phylogenetic techniques have been used to track the spread of this virus. Evolutionary work has revealed interesting evolutionary patterns as the virus adapts to new vector and novel habitats.

New update: researchers have reported success with a vaccine against Chikungunya virus. Read the article in the New York Times.