Is the appendix a vestigial organ? 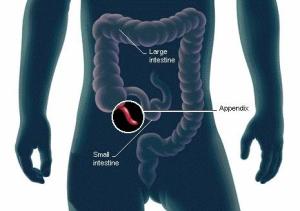 How evolution is applied to diseases changes over time. At least three ideas have been pitched to explain why we have an appendix, from an evolutionary perspective.

1) The appendix is a vestigial organ, no longer useful, that is derived from a larger structure in a common ancestor shared by humans and other apes. Charles Darwin is among those who proposed this possibility.

Darwin suggested that the distant ancestors of humans and other apes survived on a herbivorous diet rich in leaves, and thus needed a large cecum, the part of the gut that houses bacteria specialized in the breakdown of plant fiber. Darwin speculated that an enlarged cecum was no longer necessary when human ancestors shifted to a more easily-digested diet, mostly fruit.  Darwin thought the appendix shrank when it had no longer had a useful function. This viewpoint was  on display in a delightful book that I just discovered, entitled “Evolution and Disease,” by Sir John Bland-Sutton, published in 1895. (This book takes a cross-species comparative approach to disease that has also inspired more recent works such as Zootopia by Barbara Natterson-Horowitz). In Bland-Sutton‘s chapter “Vestigial Parts” the appendix is described as: “a typical example of a functionless part, and, like an idle person in a community, is not infrequently a source of considerable danger and suffering, and is responsible for a number of deaths annually.” (from appendicitis). 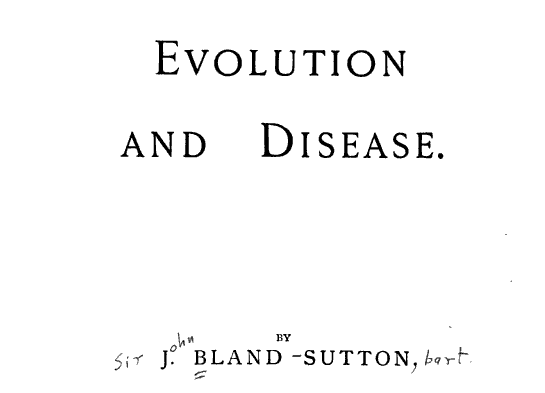 2) The second view, not incompatible with the first, was expressed in G.C. Williams and Randolph Nesse in the 1994 book “Why We Get Sick.” They argue that selection would favor a smaller thinner appendix over time as it lost its function as a digestive organ. However, deaths from appendicitis would halt the further narrowing of the organ, favoring a larger appendix: “A bit of inflammation and swelling is less likely to disrupt the blood supply of a large appendix than that of a long thin one. Natural selection gradually reduces the size of the useless appendix, but any appendix narrower than a certain diameter becomes more vulnerable to appendicitis. Thus deaths from appendicitis may paradoxically select for a slightly larger appendix, maintaining this less than useless trait.”

Williams and Nesse note the logical flaw in this argument in the next sentence:

” Selection is also almost certainly very slowly making the appendix shorter, but in the meantime the appendix may be maintained by the shortsightedness of natural selection.”

3) A third option is that natural selection is not shortsighted, but instead that a positive selection favors the presence of an appendix, increasing the survival of its bearers. This possibility has been argued by those who say that the appendix has a safehouse function for beneficial gut microbes.

In this view, the appendix provides a reservoir of beneficial microbes that can recolonize the gut after infectious diarrhea. In keeping with the view of a beneficial appendix, it has been suggested that the appendix evolved over 30 times in mammals.

Recently, the role of the appendix in protecting against recurrent infection was tested. Im and colleagues tested whether recurrence of Clostridium difficile was more common in patients who had had an appendectomy for appendicitis versus those who still had their appendix. Appendectomy increased the risk of recurrent severe diarrhea.

Read more about the study here