Today we discussed a variety of concepts related to pregnancy and reproduction. I should have pointed out that some phenomena, e.g. gradual increase in birth weight with birth order, do not require imprinting to occur. Changes in birth weight can occur entirely because of maternal gene expression in the mother, which might serve to increase the delivery of nutrients to the developing fetus differently in different pregnancies. The “maternal provisioning” can occur outside of any effect from the fetus, and thus does not require imprinting to occur.

Imprinting, when it occurs, is not an all or nothing phenomenon.  It turns out that partial expression of genes can also occur. This was recently shown in mice.

However, classic imprinting is usually thought of as a process that either turns on gene expression or completely silences it.

That process is thought to occur in the gene duplication/deletion events that can lead to human developmental disorders:

These disorders include Beckwith-Wiedeman syndrome (caused by either duplication of paternal IGF2 or inactive maternal CDKN1C). Macroglossia is a feature of this syndrome, which may reflect a paternal imprinted trait that affects sucking ability. 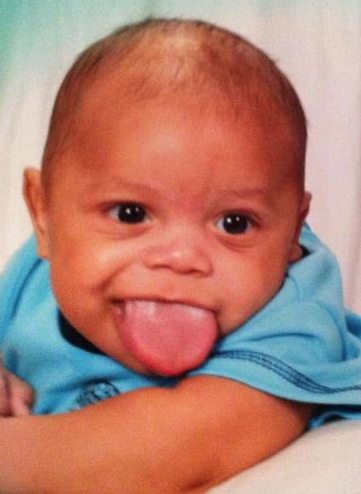 Another imprinted disorder, Prader Willi syndrome, is caused by deletion of paternal 11p15.5 portion of chromosome 15 or duplication of maternal chromosome 15), among others.

Prader Willi syndrome (pictured above) is the example of over-eating and extreme non-picky eating behavior that I discussed in class. The chromosome that is involved in this syndrome is pictured here:

The genetic region at 15q11-q13 are usually expressed only when inherited from the father. Prader Willi syndrome occurs when that region is deleted in paternally derived genes, or when the maternally derived gene is doubly expressed, which happens when the baby inherits a two copies of chromosome 15 from the mother. In both cases, paternal imprinting is lost. Because of this maternal influence in prenatal fetal development and postnatal behavior is unopposed. This unmasking of maternally influence/imprinting makes these babies undemanding of maternal resources, they grow slowly in utero, they have a poor suck mechanism at birth, and they are remarkably un-picky when it comes to eating food (and non-food items) so that early weaning is the default condition. You can read more about this, and its opposite, Angelman’s Syndrome in this paper by David Haig.