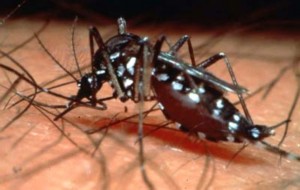 uesday we are going to discuss the evolution of virulence, using the mosquito borne dengue fever as an example. (Handout and readings are at the end of this post)

The dengue virus causes dengue fever, aka breakbone fever. As the name suggests, sufferers of breakbone fever are typically laid up in bed.  Immobility is usually associated with high virulence (pathogen replication within its host). Immobility is also a trait that benefits the transmission of vector-borne diseases. An immobile victim cannot effectively swat a blood-sucking insect. Caretakers might also be at risk from bites from vectors because they have to stay in close quarters with the victim.

Three main modes of transmission of pathogens include, direct, vectors, and environmental.

1) Direct contact diseases (like colds) are transmitted best when the victim is active. These are generally the least virulent.

2) Vector-borne diseases usually require the victim to be alive but are better transmitted if the victim is not moving. These are usually more virulent.

3) Environmentally transmitted diseases can be the most virulent. These do not require the victim to be active. Some are like vector borne diseases (cholera), in which the attendants who wash the soiled bedclothes in the river promote transmission of the bacteria. Some do just fine even after they kill the victim (anthrax), when the corpse releases infectious spores! In general, environmentally transmitted diseases might have very high virulence.

Try to read all 5. But pay special attention to the Kyle Harris and Brown readings. Be sure to read those carefully prior to lecture.